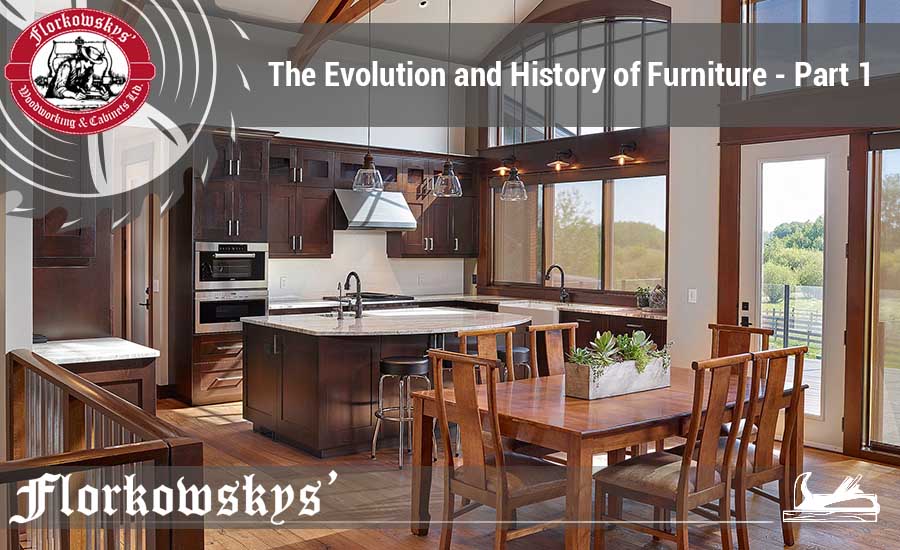 In the beginning, there was no furniture — I’m pretty sure early man just sat on the ground or even gathered fallen tree boughs and leaves to lie upon when sleeping. Furniture now is more than just where we sit and sleep — for some, they’re masterpieces of artwork or statements of social standing. Oh how far we’ve come in that regard — let’s see just how far.
When people learned to farm and lived in permanent settlements they began to make furniture. In Europe, some of the earliest known furniture comes from a stone age village in Scotland about 2000 BC. The stone age farmers lived in stone huts with roofs of whalebone and turf and inside they made stone furniture such as cupboards and beds.
Egyptians lived in large, comfortable houses with many rooms with painted walls and the floors had coloured tiles. Inside their homes rich Egyptians had wooden furniture such as beds, chairs, tables and chests for storage but instead of pillows they used wooden head rests. Common people lived in simpler homes made of mud. People may have slept on the flat roof when it was hot and they did most of their work outside because of the heat. For the poor, furniture was very basic — ordinary Egyptians sat on brick benches around the walls and used reed chests or wooden pegs on walls to store things.
In Ancient Greece, even in a rich home furniture was basic. The Greeks stored things in wooden chests or hung them from wooden pegs on the walls. They would also have a dresser to display expensive cups, people reclined on couches (which could also act as beds) and couches were simply wooden frames with rope webbing and mats or rugs laid on top.
Rich Romans enjoyed luxuries such as mosaics and (in colder parts of the empire) panes of glass in windows and even a form of central heating called a hypocaust. The wealthy owned very comfortable furniture, which was upholstered and finely carved. People ate while reclining on couches, oil lamps were used for light and they had wall paintings called murals in their houses. Needless to say, poor Romans had furniture that was very basic and sparse.
Even for rich Saxons, life was hard and rough and their furniture was very simple. Usually in a Saxon hall, there was only one room shared by everybody. Thanes (upper class Saxons) and their followers slept on beds with straw mattresses and pillows but the poorest people slept on the floor. Very little is known about Saxon furniture but it must have been basic and heavy such as wooden benches and tables. Upper class Saxons liked having tapestries on their walls but there were no panes of glass in windows, even in a Thane’s hall.
Categories: History, Interesting StuffBy adminAugust 11, 2016
Tags: Woodworking

The Evolution And History of Furniture – Part 3
September 8, 2016