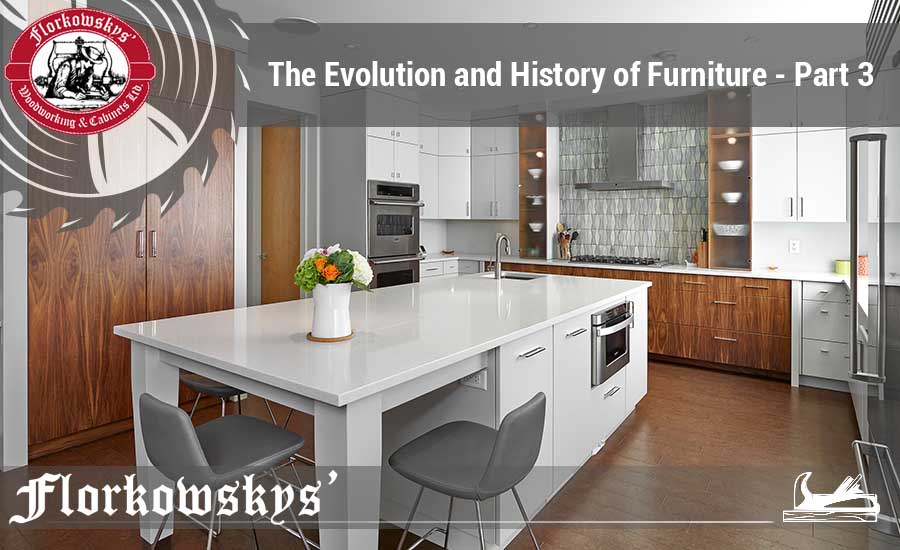 The story continues as far as what furniture used to be — before we had Murphy beds (a fold down bed or pull down bed that’s hinged at one end so it can be folded up and stored vertically against a wall or in a closet), pull out sofas and transforming futons. The introduction of style and design would start appear more frequently and then become a staple for all furniture, as it does in modern day designs.
In the late 17th century, furniture for the wealthy became more comfortable and much more finely decorated. It was often made of walnut or mahogany and decorated in new ways — veneering took thin pieces of expensive wood were laid over cheaper wood. That wood was carved out and the hollow was filled in with mother of pearl. Also lacquering was being used for furniture for the wealthy — pieces of furniture were coated with lacquer in bright colours.
New pieces of furniture came onto the scene — chests of drawers became more commonplace, grandfather clocks also became popular and later on in the century, the bookcase was introduced. Chairs also became far more comfortable because of upholstering and this is when the first real armchairs appeared.
In the 18th century, the rich and wealthy owned comfortable upholstered furniture — some of it veneered or inlaid. Cabinets and clocks were becoming more popular and furniture for the poor remained basic and sparse.
The 19th century saw the mass production of furniture for the first time in history. This resulted in a cheaper product and a dramatic fall in design standards. The poorest people slept on piles of straw because they could not afford beds.
At the start of the 20th century, gas cookers became common but because they didn’t heat the room they were being used in, people spent most of their time by the fire — which was either in the front room or living room. Rising living standards meant it was possible to furnish all rooms properly not just one.
In the 1920s and 1930s, a new style of furniture and architecture was introduced called Art Deco. It used geometric shapes instead of the flowing lines of the earlier Art Nouveau designs. The name Art Deco came from an exhibition held in Paris in 1925 called the Exposition Internationale des Arts Decoratifs. Later in the century, Great Britain became an affluent society and standards of furniture for ordinary people continued to rise.
Categories: History, Interesting StuffBy adminSeptember 8, 2016
Tags: Woodworking